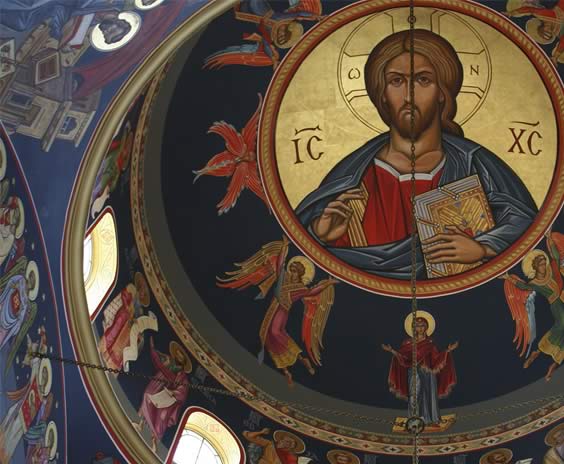 Icons play an important role in Orthodox Christian worship. The word "icon" is a transliteration of the Greek word for "image." Although "no one has ever seen God, the only Son, who is in the bosom of the Father, he has made him known" (John 1:18). And Jesus is "the image of the invisible God" (Colossians 1:15). Literally, he is "the icon of the invisible God."

For the first eight centuries of Christianity, the use of icons was common and widespread. The catacombs in Rome are a vivid early example. In the eighth century, iconoclasts (literally, "icon-smashers") made a violent attempt to rid the church of these so-called "idols". The Church responded officially and finally in 787, at the Seventh Ecumenical (universal) Council, that icons are neither worshipped nor are they idols. Rather, they are venerated holy images blessed precisely because of Jesus' incarnation.

Holy Theophany Church, like most Orthodox Churches, is filled with icons. An icon is an image of Christ, His Mother, a Saint, or an event in the life of the Church or the history of salvation. Icons may be executed in mosaic, on wood panel, on canvas, or fresco. An icon is not merely decoration or a religious painting, but a holy presence, teaching the truths of the Orthodox faith, helping guide and focus the attention of the faithful. God became flesh in the person of Jesus Christ (John 1:14), assuming all the characteristics of humanity. When God created matter He affirmed that it was good, and we venerate icons because Christ appeared among us in incarnate, material form. †