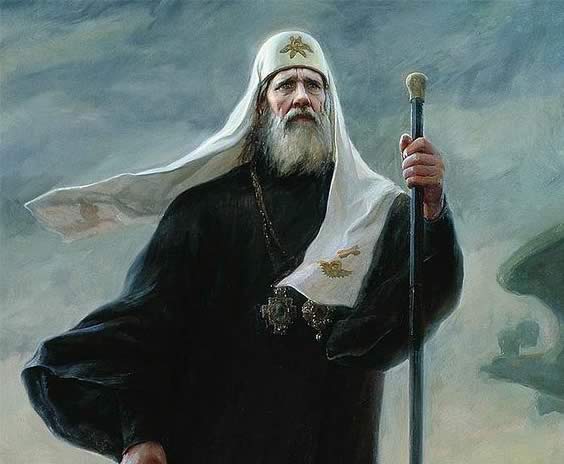 In 1741, Vitus Bering and Alexei Chirikov sailed eastward, equipped with brass plaques, staking a large area of North America as under "Russian Protection" and establishing the boundaries of what the world has ever since called "Alaska" the Unangan Aleut word for "the Great Land."

The ensuing "fur rush" brought hundreds of Siberian frontiersmen to the new territory, many of whom intermarried with Native Alaskan women and laid the foundation for Orthodoxy in the New World. When the first priests visited this region nearly sixty years later, they found the entire population baptized. The clergy were busy with chrismations and weddings, but the work of conversion had been accomplished by lay initiative. We often forget that evangelization - "mission" - must necessarily be the task of the laity. Parish priests have their ministry to their flocks. Spending too much time with folks who are not even church members can get a pastor into trouble with his congregation. Statistically, sociologically, we know that churches grow not so much from media exposure or publications but from personal contact. As Philip said to Nathaniel, "Come and see." And it is the laity who invite their friends, relatives and neighbors who constitute the essential core of this sacred outreach. They also often remain the unsung heroes of Church growth, but we should never forget their critical role.

Father Herman, an elderly monk from Valaam Monastery, volunteered to journey to Alaska when Gregory Shelikov recruited the first mission to Alaska after his 1784 conquest of Kodiak. His fur trading company had applied for a monopoly on commerce in Alaska and Shelikov hoped Empress Katherine the Great would favor his enterprise if he subsidized the clergy. After an enthusiastic send-off in St. Petersburg, the ten monks began their pilgrimage to the Pacific - mostly on foot! Shelikov provided a ship at Okhotsk, but the church, housing, and supplies he had promised never materialized. Worse, the monks found the Company exploiting and oppressing the Native Aleuts whom they had been sent to convert. 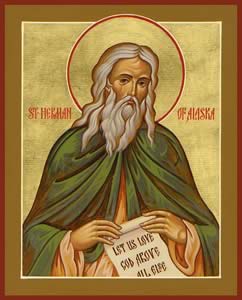 Within the year, the monastics had investigated and reported on the religious traditions of the Kodiak people and established their strategy for their conversion. They looked for ways in which their existing beliefs might form the basis for Christian faith. They sought to present Orthodoxy as the fulfillment rather than the abolition of what the Aleuts already believed. Within three years nearly all the Kodiak People had been baptized. The defense of Native civil rights the monks raised soon brought them into conflict with the frontiersmen. They were persecuted, arrested, threatened, and assaulted. Some returned home discouraged, several more drowned, and one was martyred. Eventually, the Elder Herman withdrew to nearby Spruce Island, where he resumed his monastic life in the seclusion of that forest. There he continued to appeal for government intervention, for justice for the Americans, as he called them, gaining their respect, their trust, their love and devotion.

It was the Kodiak Aleut people who venerated Father Herman as a living saint during his life (although only two miracles are attributed to him during his earthly life) and who continued to visit his gravesite, where numerous miracles of healing occurred for generations after his repose in 1837. It was their continuing veneration and the reports of continuous miracles at "Monk's Lagoon" that led to his glorification in 1970. The example of the holy, pious life of one dedicated monk was sufficient to confirm thousands in their new faith, not only during his lifetime, but for decades after his repose. "Save yourself" St. Seraphim said, "and a thousand others will be saved." There is really no substitute for commitment, devotion, personal piety, the example of just one holy person. No mission can succeed without this.

Through the prayers of all Thy Saints, 0 Lord Jesus Christ, have mercy upon us and save us!

Father John Veniaminov's task when he arrived in Alaska in 1824 was quite different. His parish had been Christian for generations, but their knowledge of the Scriptures, of "God's Law" was immature, under-developed. They needed to have God's Word in their own language and they were thirsting for a deeper understanding of their Faith. Learning their language, respectfully studying their customs, documenting their culture, Father John opened the first Unangan Aleut schools, published the first books, built the first churches, and traveled the thousand-mile archipelago for nearly a decade, evangelizing his scattered flock. 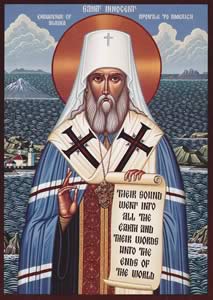 Transferred to Sitka, he mastered the Tlingit Indian language, and introduced Christianity to that tribe. Following the death of his wife, Veniaminov was tonsured a monk and consecrated bishop with the name Innocent, with responsibility for Alaska and the huge Kamchatka Peninsula in Russia. Transferred back to Siberia, he learned Yakut and published the first books, opened the first schools for that tribe as well. In 1868, he was elected Metropolitan of Moscow, where he founded the Orthodox Mission society, which funded and supported churches in Alaska for the next fifty years.

When the Bolshevik seizure of power ended this support, the American Mission survived because the educational foundation had been laid, an indigenous clergy had been recruited, trained, ordained, to continue this work. None of this would have been possible without the extraordinary educational work St. Innocent had undertaken during his decades of heroic service in Alaska. Conversion, personal piety and holiness are essential, but a mission can only be sustained by effective catechesis.

In fact, Veniaminov suggested that the headquarters of the American Diocese be transferred to San Francisco, and an English-speaking bishop appointed there, with authorization to ordain converts to Orthodoxy and to expand the Church's mission beyond Alaska. Far from denouncing the transfer of Alaska to American rule, Metropolitan Innocent saw in this a great missiological opportunity, the possibility of creating an "Orthodox Church in America."  †

This vision was embraced by Bishop Tikhon, the future Patriarch, who served in North America, moving the headquarters to New York in 1905. By this time, immigrants from Eastern and Southern Europe constituted the majority of Orthodox Christians on the continent, and Bishop Tikhon presided over a multi-ethnic, multi-lingual diocese of widely scattered parishes on both coasts. Pressured by some to impose a common liturgical tradition, Bishop Tikhon resisted, saying that America would have to develop its own liturgical life, and gradually adapt and assimilate the customs of many Old World cultures into something new, a uniquely American expression of Orthodoxy. This is precisely the vision of the Valaam monks, who wrote constantly about their desire to bring the Orthodox Faith to "the Americans." 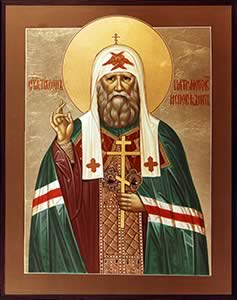 A half-century later, bishops educated and appointed in Russia, still spoke in the USA of "Nasha Missiya,” Our Mission, knowing full well that the Church had come to America precisely as a mission to America, and not as a transplanted replica of an Old World Tradition, no matter how sacred. The saints of the Church in America may all have been born and educated in Europe or Asia, but their vision, their hope, their goal was always to bring the True Faith to the land and peoples of the New World. They never saw their task as "preserving" an ancient heritage but as articulating and proclaiming their ancient Faith in a new context, making it accessible and intelligible to people who had never known Jesus Christ in the fullness of the Orthodox Christian Tradition.

The challenge before us remains the same. They have planted the seeds. They have laid the historical and canonical foundations. It is now our task to continue the heroic work they so gloriously began, to bring the Fullness of Orthodoxy to this country, to our friends, neighbors, relatives. They have shown us the way, in their dedication to this land and these people. They loved America and "the Americans."

You cannot save what you do not love. We are not here to judge or condemn but to transfigure, to bless, to save. May we be accounted worthy, following the example of these heroes of Orthodoxy, by our own devotion and commitment, by bringing others to knowledge of the Truth, in compassion and courage, to advance the work these holy teachers and pastors inaugurated in Alaska and have now entrusted to us!  †

Born to Serbian immigrants in San B Francisco zn 1863, Archimandrite Sebastian Dabovich has the distinction of being the first person born in the United States of America to be ordained as an Orthodox priest, and also the first native-born American to be tonsured as an Orthodox monk. His family was among the early worshippers of our parish. 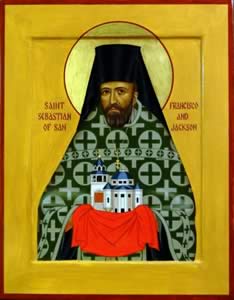 His greatest distinction, however, lies in the tremendous apostolic, pastoral, and literary work that he accomplished during the forty-eight years of his priestly ministry. He was responsible for the founding of several of the first Serbian churches in the New World. This, however, was only one part of his life's work, for he tirelessly and zealously sought to spread the Orthodox Faith to all peoples, wherever he was called. He organized parish communities of Orthodox Christians of varied ethnic backgrounds; took part in the work of St. Alexis Toth of Wilkes-Barre to bring former Uniates more fully into the Orthodox ethos and way of life; and labored to bring Episcopalians into the saving enclosure of the Orthodox Church. He was an Orthodox apostle of universal significance.

His wider ministry stretched from the Aleutian Peninsula of Alaska, to Russia and Japan, to small Balkan towns on the coasts of the Black and Adriatic Seas. But his first home—and often home base as a priest—was the parish in San Francisco.

As part of his missionary labors, Father Sebastian wrote and published, from his own meager means, some of the first English-language books of Orthodox catechism. Father Sebastian's books testify to his ardent love for Jesus Christ and His Church, to the depth of his knowledge of the Orthodox Faith, to his careful adherence to the teachings of the Church, to his literary and poetic gifts, and to his profound sense of spiritual beauty. A large portion of his books consists of sermons that he gave at our cathedral and in mission parishes on various feast days. These sermons reveal him as an inspired preacher whose words could soar to the heights and at the same time strike deeply the hearts of his listeners.

In 2007, Father Sebastian's relics were brought to the parish he helped found in Jackson, CA, and in 2015 he was glorified by the Patriarch and Church of Serbia.  †